Numark Premium DJ Controller for iPad for $425.57 at Academic Superstore
Lowest Academic Prices GUARANTEED! Sign up to get special offers. 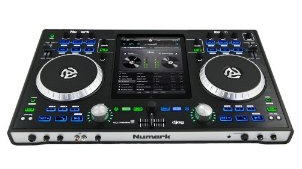 Get your iPad in the mix.

Deck out your iPad for some serious mixing. iDJ Pro from Numark is a professional DJ controller that expands your iPad’s touch interface, seamlessly integrating with Algoriddim's djay for iPad app to form a completely new DJ experience. iDJ Pro features a sleek, brushed aluminum casing and is equipped with all the professional controls you expect, plus some design features and capabilities that will inspire brand-new surges of creativity.

THE SEAMLESS MIX Combining the industry-leading design of Numark DJ controllers with the power of your iPad and Algoriddim's djay app, iDJ Pro puts a dock for iPad at the center of its traditional dual-platter setup, giving you access to your iPad’s touchscreen alongside an expanded layout of physical controls: capacitive touch-sensitive platters, large die-cast aluminum volume knobs, a dedicated music-library scroll knob, plus hot cues, looping, pitch and effect controls. Once your iPad is docked, a latching door provides secure and seamless integration, giving you an intuitive, flexible and powerful DJ system.

DJ IN THE CLOUD Thanks to your iPad’s wireless capability, you'll have access to virtually any song instantly. iDJ Pro empowers you with access to the cloud, allowing you to download tracks and have them pumping in seconds. And with AirPlay and Bluetooth compatibility, you can blast your set wirelessly through AirPlay or Bluetooth speakers. iDJ Pro comes ready to party with professional microphone and external device inputs as well as balanced XLR master outputs.

Party with the power of iPad with iDJ Pro from Numark.